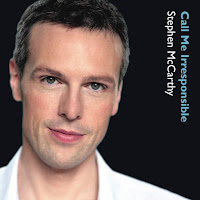 Stephen McCarthy's 2006 jazz album, Call Me Irresponsible, has been re-released with all of the profits going to NHS Charities Together. Originally recorded at NuCool Studios in London, the album is available to download or stream on iTunes and Spotify.

The band features Steve Hill on Piano, Frazer Snell on Bass, the late Chris Dagley on Drums, Adrian Revell on Sax, and a guest appearance by Richard Niles on Guitar. It also includes two bonus tracks that didn’t appear on the album but were recorded during those original sessions back in January 2006.

"We’re all trying our best to support each other during these challenging times, but one of the areas that is still under so much pressure is the NHS. We have so much to thank them for, so I wanted to help in some small way. Back in 2006, I released a jazz album called Call Me Irresponsible. It was only available as a CD (remember those?) and went out of print in 2010. I changed career and went back to my real name, swapping the acting business for the perfume industry, and the recording was archived.

Spending so much time at home recently gave me the chance to finally go through the last few boxes that were never opened when we moved and, in one of them, I found all of the original paperwork and masters. So, after fourteen years and with the help of my original producer Richard Niles, Call Me Irresponsible is available to download and stream with all of the profits going to NHS Charities Together. It’s been great fun to revisit these recordings, and I can’t believe it was fourteen years ago!"

You can buy or download the album by clicking on any of the links below.